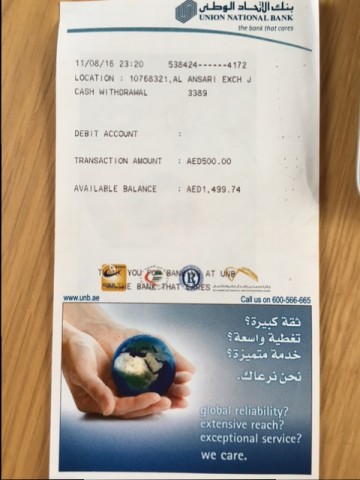 I am an ex backpacker from the UK and through the times of cash travellers cheques and cards have tried to minimise the waste when going to get cash in foreign countries.
For a good while the nationwide built a reputation for the best debit bankcard going and they are happy for you to think this however today it's not a great deal like before. I don't always get time to prepare and research money abroad and so found myself lacking in the knowledge department but worse than that I also didn't have time to use the knowledge on martins money saving

I did of course read it and select what I saw as a good option given very little time and trying to loose as little as possible on poor exchange rates.
Once upon a time Travellers Cheques was a consistent and handy system that worked even in the far-flung areas like borders of Guatemala and Mexico you could find someone to give you cold hard cash for them. Usually though exchange desks in popular backpacking haunts like Koh San Road fought each other to give the best commission going and no fees. That has forever been what the savvy traveller wants a good exchange rate and no fees.

The other great benefit of Travellers Cheques was that they were protected against loss or theft – requiring ID to cash in they were of course safer than cash. So a good plan was having the majority of my travel money in TC.

Critically a TC can be cashed up by a person at a desk who is ABLE to give you loose small denominations so if you have a $200 TC then you might get the need after the exchange rate and any fees to receive a small denomination and any coins. Obviously this is a problem where a card machine is usually only able to deliver a minimum denomination of example 100Dirhams as in Dubai.

Let me explain my idea – I took this card out and instead of filling it with a nice round figure in pounds (my native currency £) I thought ahhh give me 2000Dirhams and this way I will be able to go to a cash point and get 500 AED.

So this card surprised me when I found that after my first withdrawal of 500 then 1499.74 or something wasleft ! My plan was immediately in tatters and shows the practical issue.
If I buy a 2000 Dirham and exchange that I get 2000 Dirhams minus a fee back so its not maybe so dissimilar but with this card it was my understanding that it had already had fees in the exchange rate at purchase. So lets take a look at one great benefit of the card – you get an account to log into to manage the currencies and money on. Viewing this shows that indeed I was careful andthe 1499.74 was some kind of freak figure. I actually created my account at cash passport dot com Travelex and found that I didn't get charged a fee

Several machines DID want to charge a fee on this card that says when you buy the thing there is never a fee! But as you know extra fees can be added so if you get offered a fee then cancel and find a better ATM. In Dubai if one offered a fee of say 20 AED I simply cancelled out and went to the next one and it didn't usually show a charge. I used the card also to buy things and for that it worked well and again I got no fees charged.

So the main gripe is that you cant easily empty the card before you come back unless you login and find the actual amount on the card. However I have my suspicions that on one occasion it said insufficient funds when I actually came back with 10 on the card and lowered the amount to pay by 5 so clearly I DID have the funds???

It's a bit of a slog and understandable why people just loose interest and accept the cost of travel money.

I did pay with a poorer exchange rate but exchanged via the web so hope that also got me a better rate of exchange than simply turning up at the airport that is always bad!

So how did my debit card do in comparison? I used it for purchases and I only right at the end for cash at an ATM…

Was there any great difference ? I would have had to have made the cash purchase on the same day for this to be sure. On the one hand the debit card seems to have 2 fees extra but a better rate of exchange. Lets check todays rate to buy 200 on my card…43.62 not much change really so not much in it.

4 Tips for Protecting Your Finances as You Grow Older

The Most Thrilling Outdoor Adventures You Have To Experience in Australia