There are so many in Dubai, catering to all different tastes and budgets, but I will offer an insight into a couple that we personally tried and loved. 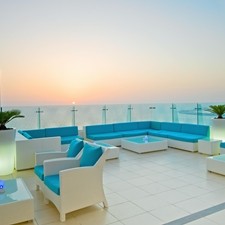 In the evenings, we often went to the Pure Sky Lounge on the 35th floor of The Hilton on the walk. It has a wrap around balcony with glass walls, offering an uninterrupted view of Dubai by night. There we had the Sharing Board, which was amazing both times we had it. You get mini burgers in buns, tempura prawns, potato wedges, a divine mixed salad with dressing and fried chicken. So filling and flavoursome – and it worked out at about £15pp. We usually ate this with a Dubai Iced Tea on the side, which was a stunning blend of gin, rum and vodka. It was almost too pretty to drink. Almost! 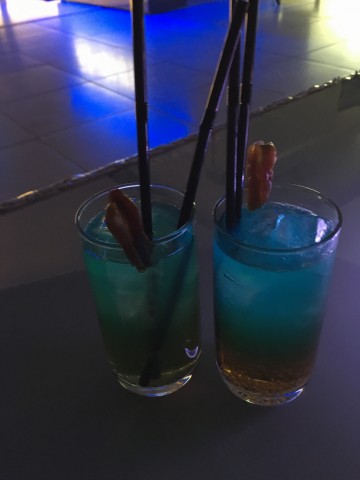 As we were staying at the Hilton JBR The Walk, we tried a few of the eateries there. Firstly there are the breakfast restaurants at The Walk, of which there were 2 to choose from or be shown to (depending on how busy they were), Crave and Hartisan. We preferred the vibe in Hartisan, as it is much bigger and airier, meaning you are sat with a wide variety of people and cultures. The food is the same in both and they are simply separated by a corridor, but Crave really felt a little too cramped and awkward for our liking.

​Another great find was the beach bar restaurant at The Hilton Jumeirah Beach, called Wavebreaker.  There we sampled the burger and the fish and chips.  It was honestly one of the best burgers I have ever eaten and the fish and chips meal was fish goujons in the most delicious melt in your mouth batter.  All very reasonably priced too, with the Arabian sea as your backdrop.  Who could ask for more?

For a romantic adult time consider a cruise on the river past old town Dubai.

A desert safari is a great way to escape the busy hot streets (you won't escape the heat) but in your 4x4 air con safari jeep you will bash up the dunes with your skillful driver..

It is really a modern city in every sense. With the political will and technology anything is possible even skiing in Dubai! 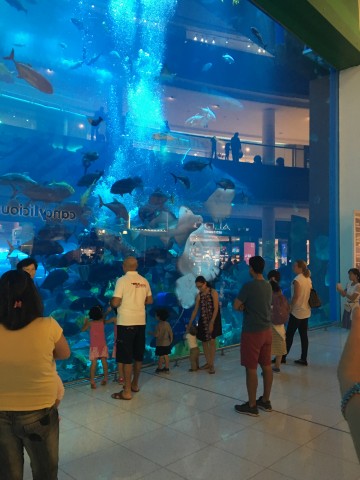 The Dubai Mall, Shopping, Dining, What to do in Dubai, Shopping Festival, Entertainment, Restaurants, Cafes, Hotels, Holidays, Events and Offers

We visited the two big Malls whilst in Dubai and neither left us wanting.  The first we went to, upon the recommendation of our hotel concierge, was The Dubai Mall.

Here you have all the expected and anticipated stores from Ted Baker to Cartier, but there is also an Aquarium thrown in for good measure!

Personally, this one had a feel like most shopping malls, just on a much bigger and grander scale, that you quickly come to expect when in Dubai.  The dress code was pretty relaxed, with ladies in shorts and shoulders bared, though the official line of respect is to cover your knees and shoulders in public.  From what we saw, not much attention was paid to those apparent 'rule breakers'.  The air conditioning here was pleasant - not icy.

The other is The Mall of the Emirates.  This one had a much more 'top end' feel, if that's even possible.  The shops were bigger, as were the brand names, with Chanel, Gucci and Louis Vuitton all jostling for your attention.

Here the general feeling was more what we expected, with fewer people dressed in anything above the knee etc., though again those that had chosen to show their shoulders or knees were not seemingly bothered by the locals or security.

This Mall does have a big sign at the entrance with the requested dress codes though, so it's probably down to your own personal comfort zone choices.

Oh - and did I mention there is a ski slope inside too?!  That's right, you can pop along to pick up the latest bag trending at Hermes, then cool off on the slopes complete with chair lifts and cabins.  I kid you not. 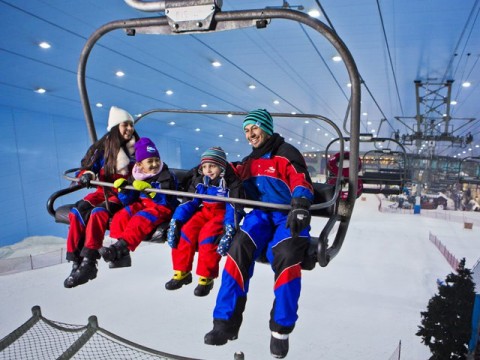 How to Buy an Engagement Ring - The Definitive Guide