Special Performances Only Seen in Myanmar

Like many people who go to a new destination, you probably want to see the popular sights and landmarks in an area, but part of doing things in style is seeing what makes a place truly special. With Myanmar, you can do that easily, such as going to one of the many special performances that are performed on a daily basis. Here is an introduction to some of your choices. 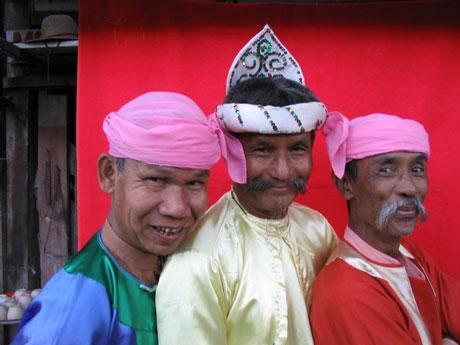 The Moustache Brothers consist of three men, Par Par Lay and Lu Maw, who are actually brothers, and Lu Zaw who is their cousin. The former trio had made their home in Mandalay, where the government put them under house arrest after they performed an “insulting” show at the home of Aung San Suu Kyi in 1996. Lay and Zaw even served 6 years in a labor camp for that performance.

Their performances, geared toward tourists, consist of slapstick humor, singing, and traditional Burmese dances and also act as mini politics and history lesson for the audience. Their act may not have changed over the years, but they feel, despite the change in government, there are still many basic issues not yet addressed.

Unfortunately, now, the trio has become a duo when Lay passed away in August 2013. The remaining two are still performing their act despite their missing member. 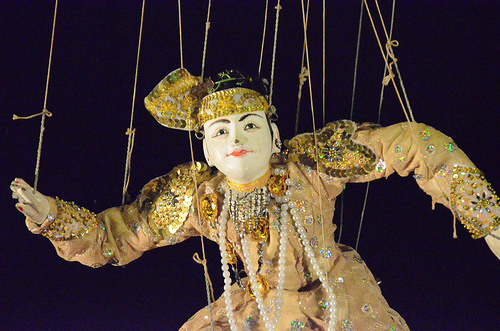 Mandalay is also the place to go if you like to see the ancient tradition of Yoke thé (thay), or marionette puppetry, still being performed today at the Mandalay Marionettes Theater. Popular from the late 1700s till the late 1800s, the performances were originally performed for the royal family and then eventually adapted for the general population. The puppets themselves are a special craft onto themselves, blending sculpture, carving, costuming, and painting into a single object; they make great gifts to bring home.

The Theater also provides an introduction to the traditional Burmese dance and music that you used to find when these performances were in their hey-day. The Theater performs daily from 830PM to 930PM and is 8 USD per person. The show is one hour or one and a half hours long depending on if you stay for the final performances of the Buddha stories. 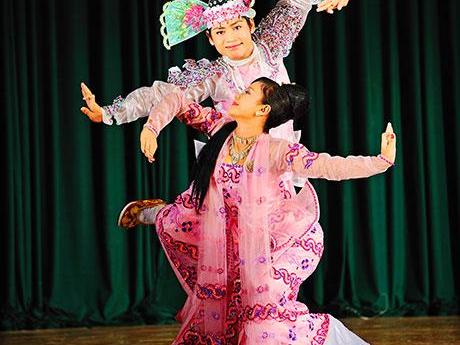 If you want to experience something that is a deep part of Burmese culture, watching a performance of any kind of Burmese dance is the way to do it. The dances are tied to the music and tradition of the Burmese, depicting daily activities, Buddhist legends, and sometimes can act as a news source for the audience.

Performed at festivals throughout the year and throughout the country, anyeint (or a-nyeint), Burmese for “gentle”, is a performance that combines dance with music, singing, and comedy routines. Performances are a sequence of solo and group dances, with the lead singer and dancer called the anyeint minthami. The costumes of the performers are identical to those seen in marionette performances.

Typically performed by women, this ancient style of dancing comes from the Pyu Kingdoms between the 5th and 10th centuries. It’s characterized by the hands extended with the thumb and forefinger touching. The costumes are usually a light colored silk dress, a waist belt, a headpiece, and jewelry. The musical accompaniment consisted of crude string, wind, percussion, and brass instruments. Evidence of this dance can even be found on the wall painting of the temples in the ruined city. Today, however, these dances are usually performed for tourists at the hotels and resorts in Bagan.

The name “Bilu” comes from the term for the ancient demons or ogres that were thought to have roamed the region around 2000 BC. These demons had powers that allowed them to change into different physical forms, one of the most famous being the Dasa-Girl from the Ramayana epic.

The names Kinnara and Kinnari refer to the male (Kinnara) and female (Kinnari) version of mythical birds that were said to have lived in prehistoric India. Part human, part bird, and separated for 700 years due to floods and storms, the creatures are finally reunited.  The dances describe their love for each other after all that time. Instead of flapping their “wings” at the arms, the dancers move the intricate costumes at the wrist, with their movements done with finesse and thoughtfulness.

Like a fairy tale, the story of the princess Me Wunna is an exciting tale filled with magic, demons, sadness, and eventually a happy ending. Living in the forests around Mount Popa, Me Wunna ate only fruits and flowers and wore the mask of a demon to scare everyone away. She had two sons with a royal man and those sons eventually became “the Brother Nats” of Taungbyone. When her sons died, Me Wunna became a Nat as well and settled at Mount Popa where she obtained supreme power in the world of the Nats.

The dancers tell her story in a green costume, which is the color of royalty, outfitted with a mask of a demon, and two feathers from a peacock’s tail. In the dance she sends away the evil spirits and forbids them to return.

In order to appease the 37 nats, the dancer, usually a professional Spirit Medium, repeats the movements of the dance three times while carrying a tray offering a green coconut, three bunches of bananas, and other items. The dancer wears a simple red silk costume, for instance a shawl or headband, to indicate which nat the dancer will be contacting during the dance.

The dancer also sings and tells stories about the life of the nat during the performance, ending with the dancer falling into a trance and “becoming” the nat. As the nat, the dancer begins to prophesize events, which the assistants help interpret to the audience.

A traditional Rakhine dance that offers the oil lamp, made of a cotton wick soaked in oil in a saucer, to the Buddha. In modern times, however, the oil lamp is now substituted by a lighted candle. The dancers are usually women, dancing gently to the Rakhine religious music so as not to spill the oil in the saucer.

Among the more popular dances in Burmese culture, the Ramayana Dance, otherwise known as Yama Zatdaw, tells the story of the heroes Rama and Sita battling the main demon, Dasa-Giri.  The dancers perform in ornate costumes and wear masks to help indicate which character they are portraying.

The dance was taken from the Thai performance of the epic when in 1767 King Hsingbyushin captured court dancers from Thailand and brought them back to Innwa, the capital at the time.

Usually performed at festivals all night, these performances have elements of traditional dance, slapstick, and drama. The dancers do highly athletic routines that get great responses from the audience, usually creating a competition among the dancers for the best cheer of approval.

A Krama for All Reasons

Moving Up-Market From Off-The-Rack in Cambodia

Reasons why you can take up dance whatever your age