This week end I repaired my own macbook air power cable ! I ordered just the broken lead from an ebay seller and it arrived just fine in a jiffy pack able to go through the letterbox so was awaiting my arrival.
The most tricky thing was getting the white power pack open and using pliers in the unnatural way (outside edge of the square tips start closed then open to force apart the case) to open the thing .
Noticing that there is little room in there once open I decided like you should to splice the new power cable to the old wires instead of trying to get to the PCB Printed circuit board instead. 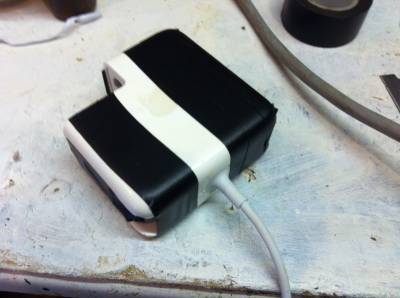 Well a new power pack is 69 pounds and this is throwing away a perfectly working pack it’s the wire that is at fault. The cable was 6 pounds and fitted perfectly both ends ie in my macbook air and the power pack.

I was going to epoxy the power pack back together but decided that black electricians tape was a better option at least initially.
Warning : Don’t use normal non electrical tape as power packs get warm and only electrical tape is valid.

Try to use a correctly cut piece of heat shrink tube to neaten the soldering joint. Use flux to get a better soldering joint. Most solders come with flux or buy separate it make sure the imputiues don’t cause a bad joint. Test the joint using your needle nose pliers. I also used pike disgorger that is a great tool as you can grip and fix the nose on the subject very handy in holding these wires.

Should you do this ?

If you have soldered before and are confidant working with this kind of thing and can do a neat job I would recommend this approach but take care and make sure to properly isolate the two wires from each other of course. If you are stupid don’t try to do this at all and instead buy a new power pack.

Watch this video on repairing your macbook power cable here

Cambridgeshire, UK
How do you feel about this post?
Happy (0)
Love (0)
Surprised (0)
Sad (0)
Angry (0)
Tags:
mac book air repairs
Caps Made Life Easier and Comfortable in Winter
Clothing Ideas for the Petite and Girly