Swimsuits: Then and Now

Have you ever taken time to think about the history of swimsuits? Well, most likely, no. You would be surprised to know that they have a huge history that has witnessed radical changes over the years. For instance, in classical antiquity, bathing and swimming was done nude. This is completely unthinkable today. This change points to how much swimsuits and their use has changed.

Some cultures allowed people to swim naked. Over the years, undergarments such as loin cloths became the acceptable dressing for swimming purposes. Men swum nude and those who did not like it that way, stripped to their underwear. It took until the 19th century for a law to be passed that prohibited nude swimming. Cities were free to establish their own laws on the matter. Men's swimming suits became common in the 1870s. The men's swimsuit was a fitting wool garment that had long sleeves similar to long underwear.

Females mostly bathed in spas; often nude. They started abandoning nudity in the 1670s, many years before men. As a matter of fact, laws banning women from nude swimming existed over a century before the one for men was established. Starting at around 1700, ladies wore bathing gowns. They were long dresses made of opaque fabric so that they would not become transparent when wet. Weights were also attached at the hem so that the dress would not rise up in the water. 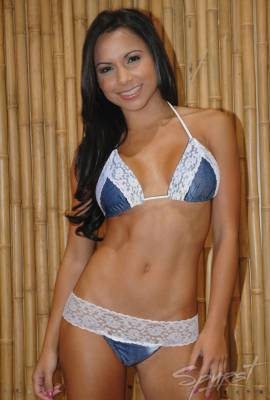 The 19th century saw the emergence of women's two-piece suits. The two-piece clothing consisted of a gown from the shoulders to the knees as well as a set of trousers that had leggings up to the ankles. The men's swimsuit remained unchanged for a century or so.
The 20th century saw modern changes for the swimsuit such as the rise to popularity of the one-piece swimming suit. Annette Kellerman, an Australian swimmer, played a critical path in this. After being arrested in the US for indecent dressing in her swimsuit, she came up with her line of one-piece bathing suits which she marketed. This came to be known as "the Annette Kellerman".

This form-fitting type of swimsuit proved popular despite initial opposition from some quarters. With time, it started shrinking. Arms were exposed as well as legs up to mid-thigh. The neck was also exposed and nothing was covered up to the bosom. With the advancement of technology and new fabrics, an astounding variety of more comfortable swimwear emerged.

Bikinis hit the stage in the late 1940s. The main inspiration behind them was the fact that glamour photography and beauty contests featured people in form-fitting swimsuits. The original bikinis covered more than the modern ones. They seemed decent. However, they shrank to  micro and tiny bikini from the1960s. Sometimes they only covered the nipples and the genitalia. The monokini topless suit was introduced as a more decent swimwear. It wasn't very successful though.

Men's' swimwear seemed to rather stagnate compare to women swimwear. Notable changes were the recession of the shorts and the introduction of popular racing-style suits. Again from 1990s, long shorts gained popularity once more.
Nowadays, a variety of swim suits exist. People have a knack for vintage bathing suits, mainly from the mid 20th century. These swimsuits are generally comfortable and they fit well. They are decent and you don't get a million eyes staring at you. They are pocket friendly and make you look original. They give a covered-up look both in style and class.

Designers For Him: Keep it Cool Poolside

Choosing the Perfect Swimsuit for Summer in 2015

I love Bikinis from the 50s with a more modern cut and smaller bottoms.

2 Cancel Reply
I love Bikinis from the 50s with a more modern cut and smaller bottoms.
Cancel Update Comment