Me Before You Book Review– Jojo Moyes

I chose this book to read thinking it was just a usual ‘chick lit’ book. I’ve been embroiled in the urban fantasy genre for a couple of years now and just fancied a good old fashioned love story to get lost in, but what I actually got was quite the opposite, an anti- love story if you will.

We first meet 26 year old Lou Clark as her boss decides to close down the café where she’s worked for the past 6 years, leaving her jobless and skill less. We follow her to interviews with Syed her jobcentre advisor who packs her off to menial jobs in a chicken factory and fast food restaurants, which she hates. Syed becomes so frustrated with her, that he suggests jobs in lap dancing and pole dancing clubs! Finally he sends her on an interview for a carer’s role, for which she makes sure there would be no ‘arse wiping’ involved. Much to her surprise she’s offered the job of carer to ex city high – flyer Will Traynor, who through a cruel twist of fate had been mown down by a motorcyclist whilst crossing a London street two years previously. Now quadriplegic with very limited movement in one arm, Will is suicidal and cantankerous 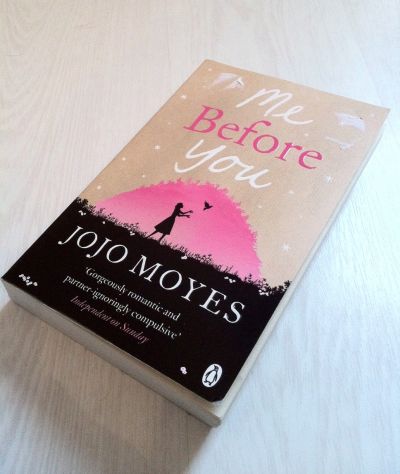 What follows is a painful and poignant story of Lou’s desperate attempt at making Will’s life worth living again. Whilst she may fail at that, what she actually succeeds in accomplishing is learning to love herself and make her own life worth living again.
This is so far my book of the year, and I will definitely be reading further titles by Jojo Moyes. She’s an extremely talented writer who manages to write very rounded, if not always likeable ‘real’ characters; a rare oddity in today’s book market. A brave story that is well researched, I was beside myself with grief at the end of the book, and it’s been a long times since a book has provoked such an emotional journey in me.

London, UK
How do you feel about this post?
Happy (0)
Love (0)
Surprised (0)
Sad (0)
Angry (0)
Tags:
book book review
Primark is a zoo and Plastic Fantastic Shoes
Katy Perry Moves On from Russell Brand

Fast Diet and Some Radical Re-thinking on Losing Weight Fast.