Digging Beneath the Surface of Lima: PreColombian Archaeology By Mike Gasparovic For most travelers, Lima represents modern Peru—a city of trendy restaurants, discos, and shopping centers that one must pass through en route to the ancient marvels of Cuzco and Machu Picchu.

What few realize, however, is that Peru’s capital conceals ruins far older than anything built by the Incas. Beneath the desert sands of the region lie artifacts that date back not centuries, but millennia. These archaeological treasures were already turning to dust before the first stones were laid at Cuzco.

The two sites listed below are must-sees for anyone visiting Lima. Together they afford a glimpse of el Peru profundo—the deep Peru that continues to exert its pressure on the present. 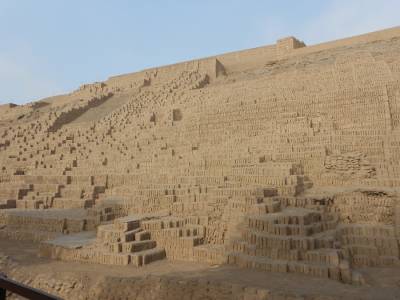 Located in the heart of ultra-modern Miraflores, just steps from the bustling Ovalo Gutierrez, this huaca (sacred monument) offers stunning testimony to the persistence of the past in Peru’s capital.

Built sometime around 500 C.E. by the Lima, a pre-hispanic civilization that occupied the central Peruvian coast, the complex was an administrative and religious center for the nearby river valleys—a kind of downtown for the first limeños. When the region was overrun in the 700s by the Wari, a militaristic tribe from the highlands, the huaca fell into decline and was eventually abandoned. It was already a ghost town when the Incas arrived some eight centuries later. 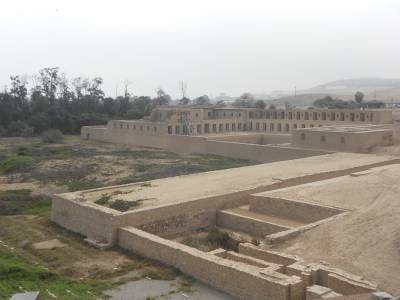 Today, visitors to Huaca Pucllana can step back in time and glimpse the daily life of a vanished people. The tour encompasses the pyramid itself, views of the grounds from the temple ramparts, and the graves where several female mummies were unearthed in 2010. (A matriarchal culture, the Wari frequently sacrificed elite women and their children to the gods.)

Children will enjoy the on-site programs that allow them to dig for artifacts. There is also a small farm with indigenous plants and animals, and a spectacular view of the pyramids can be had at night from the terrace of the adjoining restaurant, which is one of the best in Lima. 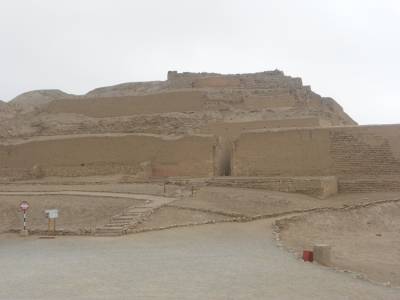 For over 1,500 years, Pachacamac was the most important temple on the Pacific seaboard of South America. The first buildings were constructed by the Lima, but it was the Wari that turned the site into a major pilgrimage destination sometime after 700 C.E.

The pilgrimages’ object was the oracle of Pachacamac, “he who animates the earth.” Feared as the creator god responsible for earthquakes, Pachacamac was sometimes depicted as having the head and wings of a bird and feline claws. The idol representing him, an ornately carved wooden staff, was consulted by powerful rulers seeking news of the future.

So great was the cult of Pachacamac that when the Incas arrived on the Lima coast in the late 1400s, they feared to tamper with it. They did, however, erect a vast Temple of the Sun on the highest promontory in the area, as well as a sanctuary for mamaconas, holy virgins consecrated to serving the god. The chief Inca himself, Tupac Yapanqui, once visited the oracle and waited 40 days for a message. 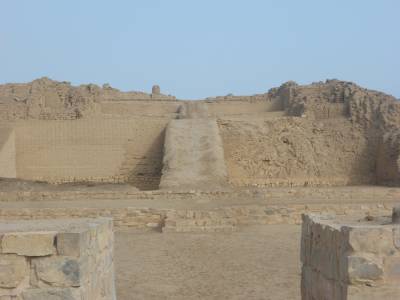 When the Spanish arrived in 1532 in search of gold, they found only empty vaults, causing them to break the sacred staff in anger. They later suppressed the pre-Inca cult as idolatry.

Today Pachacamac is the most impressive archaeological site in Lima, and a must-see for anyone staying in the capital. Its circular path takes visitors to a series of pyramids, criss-crossing alleys with stone walls, and finally to the site’s centerpieces: the Painted Temple, with its red and yellow frescoes decorating the adobe walls, and the Temple of the Sun, built high atop a hill overlooking the Pacific. The starkness of the ruins, set off against the lunar strangeness of the surrounding desert, is uncanny.

To get to the complex, some 40 kilometers from downtown Lima, take a taxi or hop on a bus marked “Pachacamac” from one of the bridges that cross the Panamericana Sur (be sure to ask the driver if it goes to the ruins). Take plenty of water and sunscreen with you; the track through the complex is long and dusty.

Mike Gasparovic is a freelance writer, editor, and translator. He devotes his free time to studying the history, art, and literature of the Spanish-speaking world and learning about its people. He currently lives in Lima.He currently lives in Lima and wrote this article on behalf of Peru for Less, a leading provider of Peru tours, including destinations such as Lima and much more.

Miraflores District, Peru
How do you feel about this post?
Happy (0)
Love (0)
Surprised (0)
Sad (0)
Angry (0)
Tags:
Peru Lima Pachacamac archaeology
Now is this about to get fashionable - its pretty ...
Amazeballs worthy #Air #snowboarding #gopro

Mistura: Annual Festival of Food in the Gastronomic Capital of South America

This is absolutely amazing ! All that really old history. I would love to go back to South America that whole western side.

0 Cancel Reply
This is absolutely amazing ! All that really old history. I would love to go back to South America that whole western side.
Cancel Update Comment