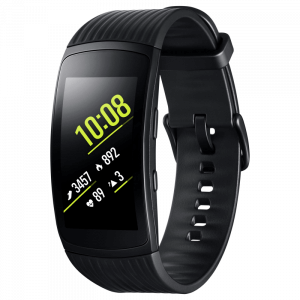 The Samsung Gear Fit Pro 2 has a variety of features. It is very extensible like many of its peers with downloadable apps such as Map My Run or the Speedo swinning app. It looks good and has some redeeming features which you can love. But sometimes it just annoys the hell out of you. So if you can live with niggles and you like to fiddle to get to know a device then it could be good for you and would seem like value. However if you want an easy to use plug and play fitness watch then it may dissapoint you.

The Samsung Gear Fit Pro 2 is the second version of samsungs effort into the fitness tracker market.

The Gear Fit Pro 2 (GFP2) is a fitness tracker with inbuilt heart rate monitor. It has functions to track position such as GPS and record your swim detecting your stroke information and general workout. It also hooks into your smartphone and can notify you of things such as phone notifications you chose. So this is super convenient. Of course it does the job of detecting your movement throughout the day and even your sleep. It tells you when you have been idle too long and suggests you to do some body twists. I like that stuff.

GFP2 also looks very nice and you will win extra points for being more original than the iWatch crowd and less intense than the triathletes who this would be really annoying for. So for the casual younger athlete who's main goal is not to be a supreme athlete this could be a great gift. It comes with 2 choice of band sizes which is not really clear and causes issue however.

"THE GFP2 IS CAPABLE BUT ANNOYING.."

As a giant in electronics they have the resources to get it right. However it suffers from what many Japanese and Asian (Samsung is Korean) manufacturers have long since suffered from- a cultural block. Let me explain further.

In Asian culture we see time and time again poor software that dogs an otherwise decent device. They have an obsession with stats and numbers. They think this is the king of selling points. While having a 4k TV is great having one which is easy to use is better. Apple were the first to really look at what the consumer really wanted. And we are talking about a long time ago now. So these tech giants should really get more of this stuff right. As a competitor the iWatch is easy to use. I haven't got one myself nor have I used one. I am so sure that I can see the iWatch in daylight however that I will stick my neck out and say that in this key area it is better than the GFP2. Yes the Gear Fit Pro 2 suffers from not being able to be seen in daylight. A glossy display that looks great indoors fails spectacularly outsde on a bright day. So after your run when you want to stop the app and finish crash on the floor you are presented with no easy to see screen at a time when you just need your watch to work out you are done. In the same way I have forgot to stop my watch after a swim 8 hours later to see it still recording. That sums up this device pretty well.