What is a micro home? 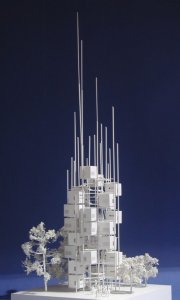 A brief look at the Micro-home or Compact home

After carrying out research on the concept of the "Micro home" it has become very apparent that the term doesn't refer directly to a singular product. The micro home has a rich history, and hails from Japan. The Micro home seems and feels very new, although the concept and several designs have been around for over a decade. The idea of a "compact" home originates from post WWII Japan, when the industrialisation of the Island nation began. Most of Japan's population were living in tin houses and generally bad conditions, and with so many people living in poverty its no wonder when offered, that the Japanese were happy to take what we would normally describe as "Sub standard housing". These were the first micro homes, and they came in the form of cramped apartments and tiny house's.

However, the concept of living in such a small space has grown exponentially since the days of living in "rabbit hutches". The micro home is now an architects dream challenge, the creation of storage space and finding maximum practicality for each room. The Japanese have developed ways of maximizing potential in these little houses by making it seem like you have more room than you think. One of the best and most commonly used methods of creating this deception is by placing a garden in the center of the home, thus creating more natural light in the process.

The first time the micro home was introduced to Britain was the Summer of 2006. These micro homes however are cubic in design and only present a temporary option rather than the Japanese original permanent designs. These modern day aluminium mini house's contain a Green energy system, an LCD television, and a telecommunications system.

There are many variations of the "micro home". I have heard of portable mini house's that you can build yourself within three hours, with running water, energy system and entertainment and furniture. I would imagine the practicality this idea will have if used in dense cities such as New York and Tokyo.

All in all i believe the potential of the micro home is endless, and judging by some of the ingenious designs, and plans for use I'm sure they will one day be