Who is HAIM the band ? 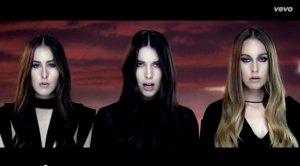 I caught a view on MTV while in an odd pub the feathers in Chalfont St Giles and it struck me that I simply had to blog it - yet again annoyingly Calvin Harris is on the editors shortlist and the video indeed makes the grade. But who are HAIM the band ? They were something few try hard to reach and most fail - unique. They are 3 sisters from L.A. who formed HAIM with drummer making 4.

HAIM are este, danielle and alana the three sisters and the drummer is dash hutton.