Album Launch Party: The Get 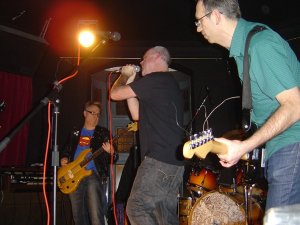 With the pitch perfect agendas of shows like the X-Factor seeking the next teen poodle to exploit, it’s refreshing to go out and see a live band with a lot of grit and a few imperfections creeping in.  And if you’re looking for something well outside the norm, then an event like the recent album release party from punk pop outfit The Get at The Railway Hotel in Southend should hit the mark.  Let’s hope their latest album Gettitude! is not the last and will provide a reason to host another of these extraordinary nights.  Indeed, if this transgender rock frolic had been promoted to the wider world, it would have relegated the Sex Pistols’ stage performance to the annals of banality.

Setting the scene is The Railway Hotel itself - on entering, a world of friendly extras from the Cantina bar scene in the Star Wars movie.  Downstairs, the atmosphere is somehow smoky without the smoke and harks back to pub rock bands of yesteryear.  Here you can mingle with an eclectic mix of aliens, punks, ageing rockers and friendly substance abusers who are ever so polite, and frankly, less offence than the drunken disco queens falling out of wine bars further towards the high street.

But climb the battered wooden stairs and you’ll soon find the gig room - a black hole booming out a barrage of expletives from the support acts of fellow punksters Cryin’ Queerwolf, Sinister Chuckles, and Luis Drayton.  The sound mixer struggled to control the audio dynamics from solid rock performances of the Queerwolf and Chuckles variety, but the evening threatened to fall off the precipice when Luis Drayton took to the stage with an outrageous tranny-electro thrash fiesta that was difficult to comprehend and certainly impossible to categorise.  Suffice to say its rap-to-backing-track agenda comprised lashings of hoarse-voiced audience abuse, groin rubbing, and posturing that encouraged all but the recklessly bold to retreat into the dark recesses of the club.  Musically, Drayton’s style was aggressive and forthright, but possibly deemed by most to be indefinable, especially when a melodic flamenco riff cut to white noise thrash in a heartbeat.  But at least the onstage full frontal nudity satisfied curious minds as to the question of Drayton’s gender.

Following that daunting support lineup, headline act The Get took the stage to confront an audience of hardened proponents and bewildered onlookers.  Formed in Southend in the late 70’s by frontman Bruce Gordon and guitarist Gary Smith, the band delivers a not-so-subtle blend of glam and punk songwriting that enters melodic territory at times, but ensures it doesn’t dwell there too long.

Gordon hit the lights with stage romps reminiscent of Queen and Peter Gabriel and a chunky edge courtesy of a competent rhythm section.  Smith’s biting guitar licks stung through the barrage and steered the band clear enough away from thrash and closer to The Get’s Southend-esque trademark style.  The audience warmed to the band’s pseudo comical antics, especially with stand out footstompers You Are Always Right and Batman And Robin from the just-released Gettitude! album.  And not to be outdone in the cross-dressing stakes, Get classic You Gotta Wear A Dress saw Gordon adorning his best frock and wig and joined on stage by Luis Drayton and Cryin’ Queerwolf for an unforgettable performance resulting in many a beer pint splashing on the sticky wooden floorboards.

This bullish show of passion and punk was not for prudes, but with good humour and spirit aplenty, it left punters of all ages and backgrounds finishing the evening wearing wry smiles, rather than looks of horror.