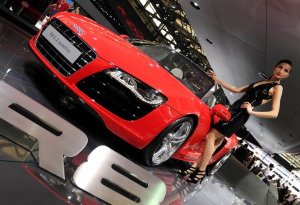 http://www.carsguide.com.au/site/pics/shanghai-auto-show-2011-roundup/2481/2/59511/
Some of the concept cars from the shanghai 2011 motor show in April. We don't think the volvo grill is at all right though most definitely Volvo it doesn't work for me. The Renault Dizir concept car seemed quite viable in terms of its styling - gull-wing doors less practical and perhaps it will remain a concept as many of these concept cars do. What is the point of a concept ? It pushes your boundaries of technology and ignores practicalities and tries to capture the spirit of the car makers core design signature. Current designers are able therefore to take elements and inspiration from these cars and indeed competitors cause this competitive future expose. I love that Volvo have elongated their coupe here but the grill is horrible Stefen Jacoby CEO ! Also the beetle (images 3 and 9) has a very porsche front end but has the distinctive shape elsewhere I am not sure what I feel about this car - perhaps they should leave it where it was like Beverly hills cop. Love the G's Reiz shown here by Toyota President, Akio Toyoda again a concept car(picture 6). Huyndai Blue 2 concept car. image 2 - another reasonable and well styled concept. Does calling your car a prototype over concept mean its more real ? BMW Vision Connected Drive prototype...(pic 4 and 5) Nice outside disgusting speedboat look inside. I won't expect this in my lifetime.

Apart from the volvo and the BMW drive interior concept - we have only picked those we have liked something significant about.

editor #1 Reviewer 189 reviews
Report this review Comments (0) | Was this review helpful to you? 0 0
back to top